Going through the Stuff – Dad’s Journey 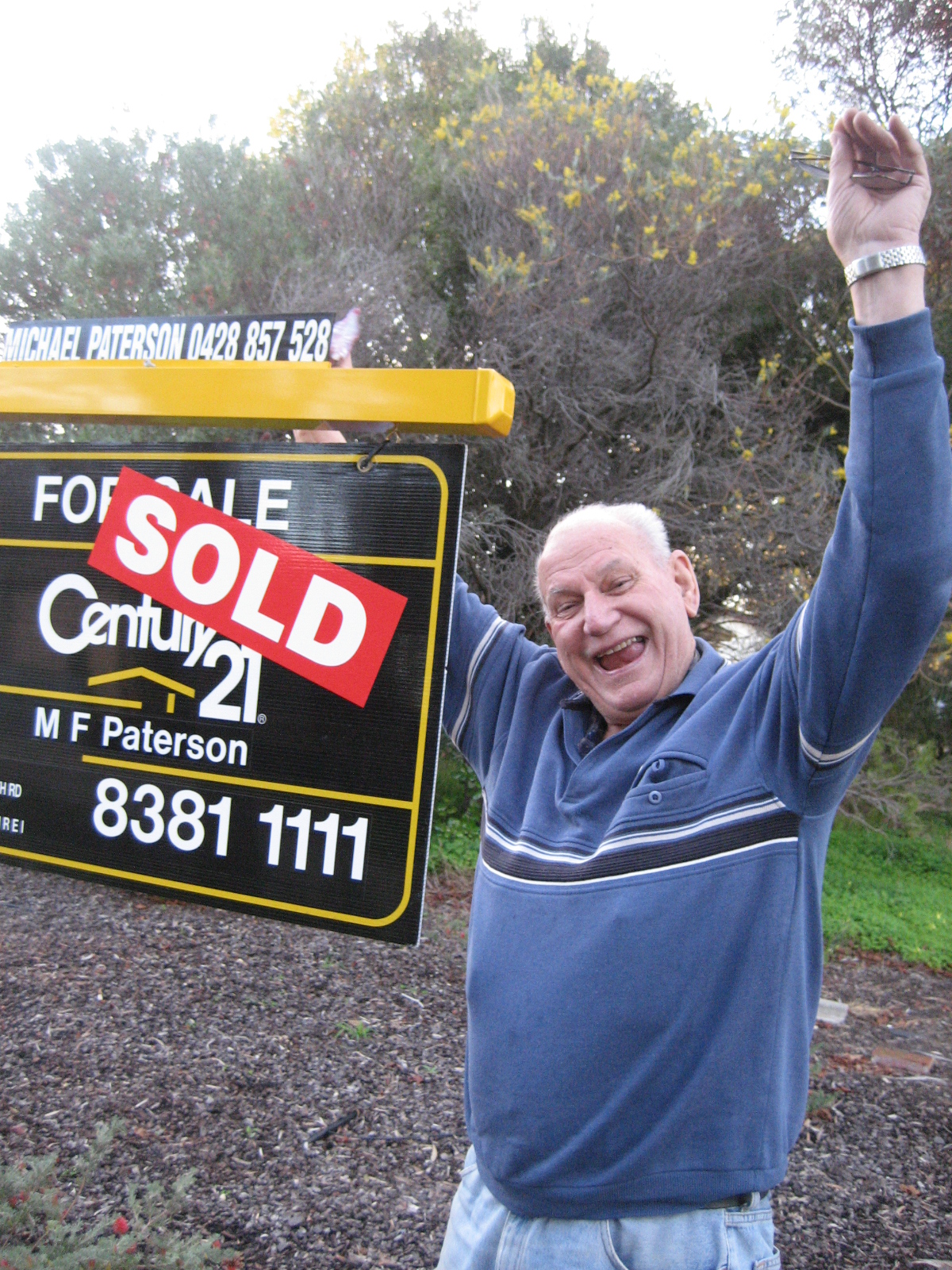 Continuing on with this series with what happened with my Dad a few years back, when he left us. I have already looked at Advance Care Directives, Powers of Attorney, and funerals and memorials as previous blogs in this series.

The thing about death, is that we never really know when it will happen. Even, as was the case with Dad, where we knew time was short, we never really knew. And because of this, often the home, and the stuff, needs to be dealt with by the family. As it turned out, Dad was in intensive care for a few months, and apart from the mail, and caring for ‘Buddy’ (the budgie), and getting clothes, there was not much needing to be taken care of at home. A few years earlier, in typical Dad style, he had downsized, and moved from the family home into his ‘first choice’ retirement village. The picture above is Dad, the day the ‘sold’ sign went up. So when it came to sorting out it was not too difficult.

This is not always the case, particularly when there has not been a ‘downsizing.’ I can remember as the Funeral Celebrant for a family, meeting with them in the family home, and as I walked through the rooms, they pointed out all of the stunning furniture that had been lovingly repaired, and french polished, by the now deceased patriarch of the family. Wow, it took my breath away! I followed the family up a couple of months later, and they had not returned to the family home. It was just too hard and there was no home for the furniture. I ended up being able to refer them to an antique dealer who facilitated an auction on site. The fact the items were going to a new home certainly took the weight off the decisions that they were needing to make.

Anyway back to Dad and his unit. Often, if there is a retirement or nursing home involved, things need to be cleared quickly. We were very fortunate, as Dad’s complex gave us a couple of weeks. This led to a gathering one weekend where we went through the unit to work out where things would end up. There were the special items; in fact Dad had compiled a list of them, and so we saw these as important. There were some figurines, which as it turned out, according to an antique place, were not that valuable (you can tell by the fingers), some glasses and crockery, which I remember were brought out for special occasions when growing up, a coffee table that was made for Mum and Dad’s wedding, television, stereo, laptop and some items of furniture. We found a very old drill press that ended up in a museum, and some regalia that ended up in a shop that sold such items. Dad had a walker, which for some reason got us a bit teary, but we were able to give to someone who needed it. Clothes were either taken by one of us, or donated to an op-shop.

Then there was ‘Buddy’ the budgie who Dad had high hopes to be a talking companion. Things did not quite go to plan with the ‘talking thing’ and so was taken by my sister and her family to a new home. As it turned out, a few months later, ‘Buddy’s’ cage was accidentally left open, and he flew away, never to be seen again. These things happen. Dad also had a pretty new car, and my brother-in-law took it upon himself to find an eventual buyer. More on that later.

There were two boxes in the shed. When we looked inside we saw some of Dad’s most treasured memories of Mum. The songs she loved to sing, in particular, I Believe (watch this version by Englebert Humperdink).Always bring a tear to my eye. My sister just looked at me kindly and said “I’ll take them.” These precious items will always be referred to as just ‘the boxes.’

Dad was very matter of fact when it came to stuff. A key part of his upbringing was to keep it simple, and if a decision needs to be made, just make it. But for a remaining partner, this ‘stuff’ is where much of the memories are. What may be a simple little trinket, may hold some irreplaceable value and can be hard to let go of. The older we get, the harder it becomes. For us, that final go through, held a lot of healing for us. Dad would have been so proud. On to more of Dad’s journey in the next post.